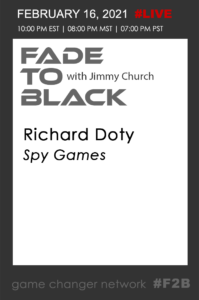 Tuesday on FADE to BLACK: Richard Doty joins us for a very open and comprehensive conversation about his career, Ufology, Government and Military secrets about ET, and the future of Disclosure.

Today Richard is retired and employed as a consultant.