Author, lecturer, and filmmaker Richard Cassaro is a student of ancient cultures, comparative religion, sacred symbolism, esoteric architecture, and secret societies. As a professional researcher into ancient cultural parallels, he has traveled to many countries in his quest to uncover a lost prehistoric Golden Age culture that was highly sophisticated and whose legacy is still visible in the ruins of the world´s first known civilizations. His highly acclaimed bestseller, Written In Stone, uncovers the lost Universal Religion of this Golden Age culture, which he claims was practiced globally in antiquity, found memorialized in pyramids, Triptych Temples, and identical images worldwide. The central tenets of this tradition have been perpetuated in Western "Secret Societies." The most visible of these is the so-called "Masonic Fraternity," an age-old chivalric Order whose ranks have included Europe's Gothic cathedral builders and America's Founding Fathers. 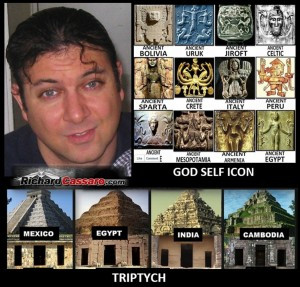