Maureen Elsberry is a UFO journalist, investigator, and researcher. She serves as the Marketing Director and contributing writer for both OpenMinds.tv and the now defunct Open Minds magazine. Maureen is also a co-organizer of the International UFO Congress, the largest annual UFO conference in the world.

She co-hosts  the web series Spacing Out! and starred on the show Uncovering Aliens with appearances on Animal Planet, Science Channel, Destination America, American Hero's Network, and on numerous radio stations across the country. She has also served as the ambassador for the Science Channel's Are We Alone? week.

Jason McClellan is a UFO journalist and the producer of the web series Spacing Out! He is also the web content manager and staff writer for OpenMinds.tv, and a co-organizer and technical producer of the International UFO Congress. As a founding member of Open Minds, Jason served as a writer and editor for the now defunct Open Minds magazine. He has appeared on Syfy, NatGeo, and, most recently, he co-starred on H2's Hangar 1: The UFO Files. 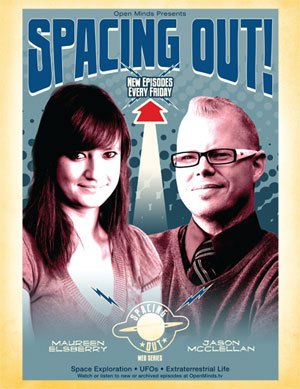