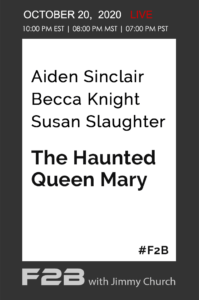 Tonight our guests are Aiden Sinclair, Becca Knight, and Susan Slaughter.
We are going to discuss our Halloween Weekend on the Queen Mary, ghost hunting, spirits, witches, goblins, and what are the most haunted places in the world.

Aiden Sinclair is an active Magician Member of the prestigious Academy of Magical Arts at the Magic Castle in Hollywood, California, and has been a featured performer on the hit series America's Got Talent and Penn and Teller's Fool US. As well as appearing on national television programs in England, Ireland and South Africa.