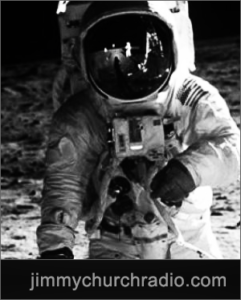 Tonight is the 50th Anniversary of Apollo 11 and we are going to discuss this historic event... which may be the most significant moment for all mankind.

Apollo 11 was the spaceflight that first landed humans on the Moon. Commander Neil Armstrong and lunar module pilot Buzz Aldrin landed the Apollo Lunar Module Eagle on July 20, 1969. Armstrong became the first person to step onto the lunar surface six hours later on July 21 and Aldrin joined him 19 minutes later. They spent about two and a quarter hours together outside the spacecraft. Command module pilot Michael Collins flew in lunar orbit while they were on the Moon's surface. Armstrong and Aldrin spent 21.5 hours on the lunar surface at a site they named Tranquility Base before rejoining Columbia in lunar orbit.

All three astronauts returned to Earth and splashed down in the Pacific Ocean on July 24, 1969, after more than eight days in space.

We will have special guests and take your phone calls.
https://www.nasa.gov/mission_pages/apollo/apollo-11.html