Ben Moss On Fade To Black 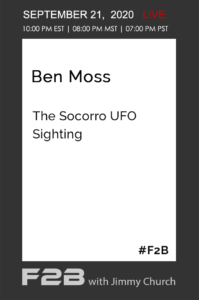 Ben Moss has been with MUFON since the early 90’s. He is a native of Richmond Virginia where he studied Psychology at the University of Richmond.

As a Mufon investigator, Ben also diligently studies such disciplines as History, Archeology, Physics, Astronomy, Religion and many other
Sciences required to investigate such an elusive subject as ‘UFO’s’.
Since a chance encounter with James Fox at the 2014 Mufon Symposium, began a long and thorough search for what Ben called ‘The Lost Socorro Footage’. After locating and presenting this VHS video, Ben was introduced to the original NICAP investigator, Ray Stanford.

Five years later and after hundreds of hours of research, Ben has just release his new book: Not of this World: The 1964 Socorro UFO with Humanoids: Witness, Policeman Lonnie Zamora.