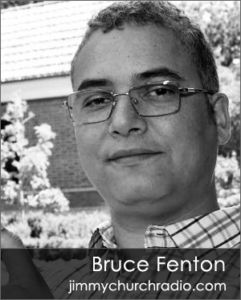 Tonight, our guest is Bruce R. Fenton and we are going to discuss the release of his new book: 'Exogenesis: Human Hybrids, A Scientific History of Extraterrestrial Genetic Manipulation', co-authored with his wife, Daniella Fenton.

Bruce is a British multidisciplinary scientific researcher. His expeditions have been featured in mainstream newspapers such as the UK Telegraph & Daily Mail newspaper as well as on the Science Channel's 'The Unexplained Files'. Bruce is currently a recurring guest expert on History Channel's Ancient Aliens in seasons 14 and 15. He has two books, 'The Forgotten Exodus: The Into Africa Theory of Human Evolution' (foreword by Graham Hancock) and 'Exogenesis: Hybrid Humans - A Scientific History of Extraterrestrial Genetic Manipulation' (foreword by Erich von Daniken).