Buff Parry On Fade To Black 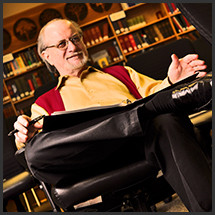 Louis Buff Parry was born in the southeastern San Francisco Bay Area at the end of 1947, Dec 28. He continued his education in the US Air Force learning to first systematically detect embedded sound patterns and codes in Radio Ops, and later to become a member of the Pacific Ground Electronic Engineering Installation Agency. Mr. Parry studied at San Jose State University, Carleton University in Ottawa, and taught in four faculties at the University of Regina. Mr. Parry still occasionally teaches at the University of Alberta and at Saint Stephen’s College, and guest lectures at universities, museums, and other venues around the world.