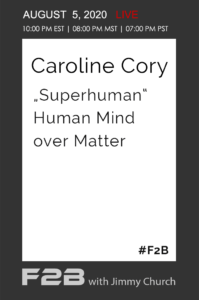 Tonight our guest is Caroline Cory to discuss her new film, Superhuman, an award-winning documentary that provides tangible evidence for the powers of the human mind over matter. Through ground-breaking scientific experiments and real life demonstrations, viewers will find themselves connecting the dots about the relationship between mind and matter and discover whether they live in a simulated matrix or if they can have any control over their physical reality.