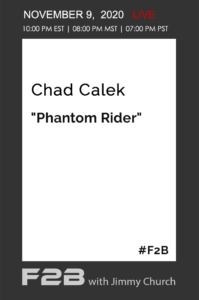 Tonight our guest is researcher, TV host and film director, Chad Calek. Chad joins us to discuss the premiere of his new film: "Phantom Rider", his new five picture deal with Gravitas, and the current state of the UFO question.

Chad Calek has spent over 25 years investigating the world’s most haunted locations, in search for answers to the bizarre, the mysterious and the unexplained. Although known for capturing some of the most compelling evidence in the history of the paranormal field, Calek has also developed a reputation as a staunch "debunker" who has discovered rational explanations to many of the world’s most famous paranormal legends.

Chad Calek is the director and producer of the AMERICAN GHOST HUNTER documentary, Sir NoFace and part two: Two Face: The Grey.

Tonight we will discuss part three of the No Face series: "Phantom Rider", which is set for premiere and worldwide release tomorrow, November 10, 2020.