Claudia Ackley On Fade To Black 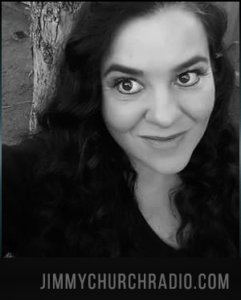 Claudia Ackley lives in Crestline California. She is a single mom of two beautiful girls who are honor students. She worked at Hoag Hospital for 16 years, working with cancer patients and also worked in the pharmacy as a technician 3.

In 1996 her life changed forever when she was hiking Upper Falls in Woodline and in the middle of the night and had her first glimpse of what she thought was Bigfoot.

Claudia then started to research the Sasquatch phenomena.

She had two sightings: the first one was in Washington State with a friend who filmed the creature that was 75 in front of them.

The second sighting was on March 27th 2017 when Claudia was walking with her daughters on a trail in Crestline when they ran into a giant Neanderthal looking man that was 30 feet up on a tree and her daughter that was behind her video taped it twice.

Once she and her daughters were safe, Ackley called authorities to report the Sasquatch sighting, but they insisted she had seen a bear. That denial inspired Ackley to file a lawsuit against the California Department of Fish and Wildlife and the state Natural Resources Agency last month, accusing California of dereliction of duty for failing to protect Bigfoot and infringing on her constitutional rights.