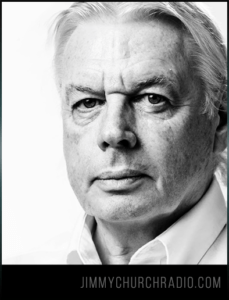 David Icke is an English writer, public speaker, and former media personality best known for his views on what he calls “who and what is really controlling the world”. Describing himself as the most controversial speaker and author in the world, he has written many books explaining his position, dubbed “New Age conspiracism”, and has attracted a substantial following across the political spectrum. His book, The Biggest Secret, has been called the conspiracy theorist’s Rosetta Stone.

Today his books are read all over the world and his speaking events are watched by thousands on every continent. Why? Because what he has been so derided for saying is now happening in world events and even mainstream scientists are concluding that reality is indeed a simulation.

Almost every day something that David Icke said long ago is supported by happenings and evidence. As Mahatma Gandhi said: ‘First they ignore you, then they laugh at you, then they fight you, then you win.’

His latest book is called: "Everything You Need to Know: But Have Never Been Told" and tonight we are going to discuss the latest Facebook data dump, YouTube and Twitter censorship and Cambridge Analitica.