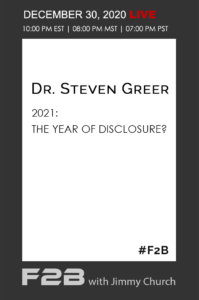 Tonight is our final show for 2020 and our guest is Dr. Steven Greer. We will talk about the impact of his new film: Close Encounters of the Fifth Kind and what Disclosure we can expect in 2021.

His last film, “Unacknowledged: An Expose of the Greatest Secret in Human History” was one of the most watched documentaries of the last three years.