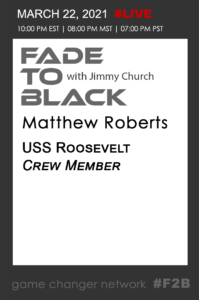 Monday on FADE to BLACK: Matthew Roberts joins us for his first major media appearance!

Matthew spent sixteen years in Naval intelligence. In 2015 he was present in the Theodore Roosevelt Strike Group for the events that brought us the now declassified Gimbal and Go Fast UAP footage.

He left his job at the Office of Naval Intelligence in March of 2020 when he ended his sixteen year career in Naval intelligence. He has written a book about his personal experiences with the phenomenon called 'Initiated' which is now available on Amazon.