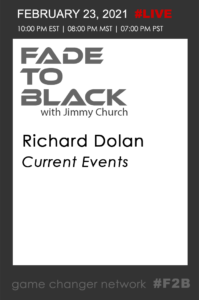 Tuesday on FADE to BLACK: Tonight, our guest is Richard Dolan, who joins us to discuss the latest in UFO news including the AA flight that had a close encounter this past Sunday.

Richard's latest book is: The Alien Agendas: A Speculative Analysis of the Those Visiting Earth.