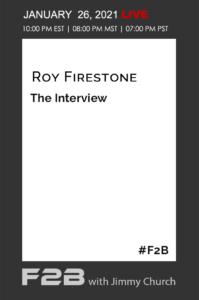 Tuesday on FADE to BLACK: Roy Firestone joins us for the first time to, well, get interviewed.

Roy is a seven-time Emmy Award-winning and seven-time cable ACE Award-winning host, interviewer, narrator, writer, and producer. As the ground-breaking, original host of ESPN’s legendary Up Close, Up Close Classic and Up Close Primetime, Firestone has interviewed more than 5,000 athletes, musicians, actors and political figures, as well as scores of writers and filmmakers.

Not limited to television, Firestone is also prolific on the printed page — as the author of two best-selling books, Up Close with Roy Firestone, and most recently, Don’t Make Me Cry, Roy, and tonight we'll discuss his latest work: "That's What I'm Talking About".