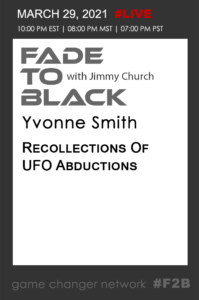 Yvonne Smith became concerned with victims of Post Traumatic Stress Disorder ["PTSD"] in the late 1980s, and in 1990 received her certification from the California Hypnosis Motivation Institute. She immediately began to work with PTSD victims, assisting them and encouraging them to work through and cope with their PTSD.

Observing that many of her subjects were describing a pattern of alien abduction and other close encounter experiences, in 1991 Yvonne founded CERO [Close Encounter Resource Organization] which provides personal attention and maintains active monthly support group meetings where PTSD victims share their thoughts and feelings about their unusual experiences.

While maintaining personal contact with her subjects, since 1991 Yvonne extensively co-lectured with Harvard's John Mack, M.D., Budd Hopkins, and David Jacobs, Ph.D., in the United States at M.I.T and several other universities.

She has published two books: Coronado and most recently: Chosen: Recollections Of UFO Abductions Through Hypnotherapy.