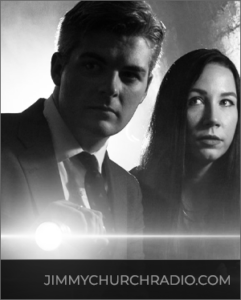 Hellier, starring Greg and Dana Newkirk and directed by Karl Pfeiffer, is a five-part, cinematic documentary series that investigates a new and intriguing supernatural mystery. What began as a plea for help from a frightened man, harassed by what he believes are extraterrestrial forces, leads a small crew of paranormal researchers to a dying coal town, where a series of strange coincidences uncovers a decades-old mystery with implications as deep and far-reaching as the caverns beneath Appalachia.
Now streaming on Amazon Prime, YouTube, and Hellier.tv.

Greg Newkirk is one of the world’s only full-time paranormal researchers, and has spent the last two decades tracking down and investigating cases of the strange and the supernatural, and conducting groundbreaking research on everything from alien abduction phenomena to poltergeist hauntings. Greg is also the co-founder of the Traveling Museum of the Paranormal & Occult, the world’s only mobile museum of the unexplained, and his work in the fields of cryptozoology, parapsychology, and paranormal research has seen him featured on hit shows like Travel Channel’s Mysteries at the Museum and Animal Planet’s Finding Bigfoot.

Dana Newkirk is a practicing hedgewitch with well over two decades of experience in seeking out the strangest cases of the unexplained. Dana began her career by forming the first-ever all-female paranormal investigation team in the late 90s, the subject of SPACE’s Girly Ghosthunters series. In 2013, she co-founded the Traveling Museum of the Paranormal & Occult, for which she serves as head curator. When she’s not conjuring up conversations with phantoms on hit television shows like TLC’s Kindred Spirits or Destination America’s Paranormal Lockdown, Dana can be found giving tarot readings, interactive lectures, and hands-on workshops to packed houses across the country, sharing her expertise on everything from divination, to conjure & rootwork, to practical magic.