Tony Topping On Fade To Black 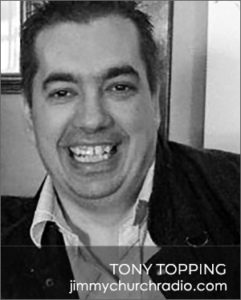 Since the age of two Tony Topping has been subjected to extreme paranormal experiences, that escalated in 1996 upon returning from London to his town of Selby in North Yorkshire where he began to have encounters with UFO’s over his house. From May 1999 until November 1999 he filmed a UFO repeatedly over his house and appearing on numerous occasions.

Tony has appeared for ITV This Morning, The One Show, Channel 4, E4, Channel 5, BBC 2, Sky Arts, Sony Pictures, BBC Regional & National News and lots of radio shows from ILR to BBC and writes for the Australian Paranormal Magazine, Oddities.