On Wednesday we are talking about Q with intheMatrixxx and ShadyGroove - two prominent voices in the QAnon Movement community. ShadyGrooove and intheMatrixxx have embarked on the journey of Q together and worked tirelessly to provide a place that will host all the relevant information about Q and POTUS and much more.

IntheMatrixxx has been researching Bloodlines, monetary systems and symbolism for decades. Focusing on researching the cabal and what they believe in and how they do what they’ve done to the population. Matrixxx has developed a large Twitter following by being a conduit and a good steward of information from the Q research boards to Twitter. Almost every Q post is on his twitter timeline. IntheMatrixxx has been in Q posts about 9 times. Q has also confirmed who is [P] research that was researched by many brilliant Anons with Q post 1970. 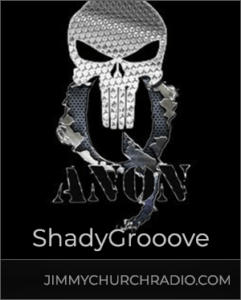 Shadygrooove is researcher for over 2.5 decades into the lie called history, and the corrupt elite who sit atop the largest criminal organization to enslave mankind ever created (Cabal). ShadyGrooove started the Truth for Freedom channel on you tube. (http://YouTube.com/truthforfreedom) in June and hosts the Q Lounge Live Friday nights at 10pm Eastern along with his co host intheMatrixxx. ShadyGrooove discovered Q at the beginning in Oct 2017 and being fascinated with all the drops and connections, knew it was answering a call to stop and pay attention. Then later teamed up with intheMatrixxx to start a whole new project. To unite all patriots and POTUS supporting Americans to inspire and empower people to stand up be heard. To help the president put us on a path to success.

http://Inthematrixxx.com is a collaborative effort to reshape the social media model to all the information instead of some of it. QSN, Qarmy Social Network exists for Patriots to be uncensored and speak to peers who understand the information Q and POTUS have given us. Matrixxx and Shady host live, The Matrixxx/Grooove hour on YouTube/Periscope.
Tonight we get to ask questions about Q, the Crumbs, the Camp, and the Comms.