John Burroughs and James Worrow On Fade To Black

"Weaponisation of an Unidentified Aerial Phenomenon" 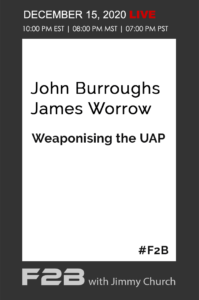 Tonight, John Burroughs announces the release of his new book: "Weaponisation of an Unidentified Aerial Phenomenon", co-authored with James Worrow, as we approach the 40th Anniversary of the Rendlesham Forest Incident. Jimmy Church has written the foreward to this very important book and it is available for the Kindle version pre-order today and the release is December 16th, 2020.

John entered the USAF in 1979 and served twenty-seven years both in active and reserve. He is currently USAFR (Retired from the Air Force Reserves).