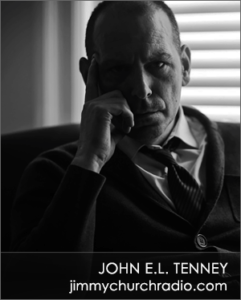 John E.L. Tenney is one of the most well-recognized and highly sought-after investigators of Paranormal and Occult phenomena, UFOs and High Strangeness in America. Mr. Tenney has been actively involved in these fields of research for three decades. It's estimated that, over the past 30 years, more than 100,000 people have attended one of John’s signature “Weird Lectures".

Tenney’s columns and articles have been printed in magazines and newspapers world-wide, including NBC, A&E, Fox, SyFy, The Detroit Free Press and Huffington Post, Men’s Health and The New York Times, and Wall Street Journal.