Lynn Picknett And Clive Prince On Fade To Black

When God Had A Wife 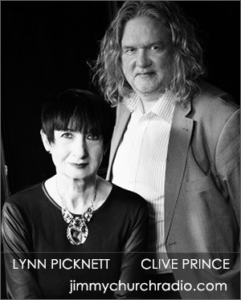 Tonight our guests are Lynn Picknett and Clive Prince.

Lynn and Clive have researched historical and religious mysteries, authoring such bestsellers as The Stargate Conspiracy and The Templar Revelation, which directly inspired The Da Vinci Code. Frequent speakers at conferences around the world, they regularly appear on TV series such as Forbidden History, History’s Ultimate Spies, and Medieval Murder Mysteries.

Tonight we are going to discuss their new book: "When God Had a Wife", where they reveal the spiritual legacy of the Jewish goddesses and the Sacred Feminine lives on. Drawing on historical research, they examine how goddess worship thrived in early Judaism and included a pantheon of goddesses. They share new evidence for an earlier form of Hebrew worship that prayed to both male and female gods, including a 20th-century archaeological discovery of a Hebrew temple dedicated to both Yahweh and the goddess Anat. Uncovering the Sacred Feminine in early Christianity, the authors show how, in the first century AD, both Jesus and his great rival, Simon Magus, were attempting to restore the goddess-worshipping religion of the Israelites. The authors reveal how both men accorded great honor to the women they adored and who traveled with them as priestesses, Jesus’s Mary Magdalene and Simon’s Helen. But, as had happened centuries before, the Church rewrote history to erase the feminine side of the faith, deliberately ignoring Jesus’s real message and again condemning women to marginalization and worse.