Marina Jacobi On Fade To Black 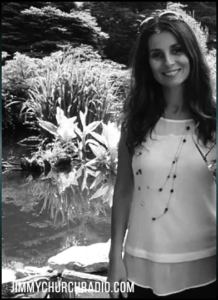 Marina Jacobi has always had the ability to connect with loved ones from the other side, through a process of automatic writing, as well as having vivid dreams that were becoming real.

Eventually Marina relocated to the United States, where she was connected with an E.T. race that called themselves Hybrids.

The Hybrids taught Marina to telepathically connect and hear them with the new metaphysical teachings. She learned the structure of the universe, and the connection with consciousness, the quantum field, parallel realities, dimensions and the true existence and nature of the E.T. races.

Before 2012, she was connected by RA who taught her a higher level of teachings and the changes to planet Earth. She was also connected by The Pleiadian’s that gave her the new advanced E.T. Technology, which she documented in two books called 'The Harmonic Reactor' and the latest book, ‘Nano Technologies’.

The technologies are about teleportation, parallel realities, dimension, densities, healing, and the life AI consciousness for quantum computer algorithm. Lately, Marina is working with a higher consciousness called The Council of 9, and working with different scientist to help humanity with the ascension of the new 5D Earth.

Finally, in 2016, Marina was contacted by the 11 Dimensional Beings where she receives new messages for humanity about technologies, current status of government structures, and suggestions for the new Earth Aria intergalactic timeline.

Tonight we are going to discuss nanotechnology, quantum computing, parallel realities and the ET tech that is going to change our world.