Marla Martenson On Fade To Black 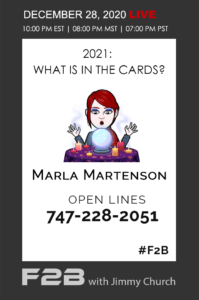 Tonight we are going to end the year with a look forward to 2021 with Marla Martenson. We will discuss the year that was, 2020, what we can expect in the new year, and then we'll take your phone calls as Marla will be doing some readings for the Fadernauts!!!

She has been using her intuitive skills to connect singles with their soulmates for two decades. Marla also hosts a podcast called, The Mystical Matchmaker.

Marla’s latest memoir, The Magic Seeker humorously chronicles a year in her world as she balances her life as Cupid to muggle multi-millionaires, and her deep dive into the mystical, magical and the occult.

Marla has been featured on The Today Show, WGN Chicago Morning News, Beyond Belief on Gaia TV, and hundreds of radio shows including Coast to Coast AM and Fade to Black.