Michael Gregorian On Fade To Black 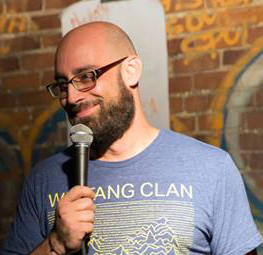 Michael Gregorian is a comedian from Glendale California which automatically makes him Armenian. Michael has been performing and producing comedy for 5 years and is also the creator of Armenian Nights Comedy.

Ever since a young age where as he describes was his "introduction to comedy 101" He would sneak into his room to listen to Eddie Murphy Delirious and Raw. This early experience along with being shown what was real comedy, by his uncle. He encouraged him and his cousin to listen to everyone from Sam Kinison to Dice clay and realize that comedy, was a reflection of its surroundings and times and was a narrative to the public.
Website: http://www.microphonemonkey.com/michael-gregorian/