Mrs. Smith On Fade To Black

Woman On The Verge Of A Nervous Breakthrough 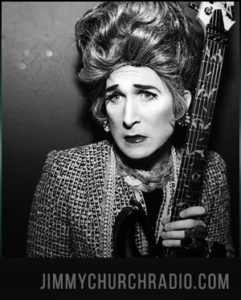 Mrs. Smith is a philanthropist, tone poet, and the world's most unlikely guitar hero. Reigning queen of the Shred for Your Life Contest she also performed at the Guitar Gods Festival in Miami opening up for rock legends Yngwie Malmsteen and Steve Vai.

She has also been seen at 54 Below, First Avenue, Webster Hall, Ars Nova, The Laurie Beechman Theater, Upright Citizens Brigade Theater, The Bell House, Union Hall, and the legendary Bushwig Festival, among many others.

Tonight we are going to talk about Mrs. Smith spiritual journey, her musical influences, her gear, her style... UFOs, dark entities and of course, her cat.