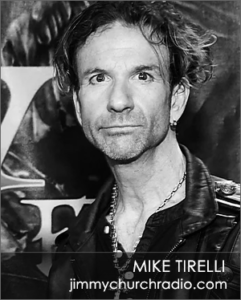 It's the FADE to BLACK night of music with Rising Five vocalist/front-man Mike Tirelli here to talk about his career fronting such metal bands as Riot, Messiah's Kiss and Holy Mother.

Rising Five released their debut EP, No Death Reborn late in 2018 and are currently working on their next studio project and have just signed a new record deal.

Also tonight, we will have Dio guitarist Tracy G joining us to talk some guitar and Ronnie James Dio!

Tracy G was one of the most respected guitar players in Los Angeles with bands such as Swift Kick and WWIII before joining Dio from 1993-1999, completing three albums: Strange Highways, Angry Machines and Inferno: Last in Live. Live in London, Hammersmith Apollo 1993 was released in 2014.