Peter Davenport On Fade To Black 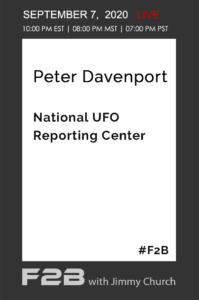 Tonight, our guest is Peter Davenport, and we are going to discuss the recent Nuforc UFO reports that are making headlines around the world.

Peter has been director of the National UFO Reporting Center since 1994.

In addition to being the director of the National UFO Reporting Center, Peter has served as the director of investigations for the Washington Chapter of the Mutual UFO Network.

Peter has been witness to several anomalous events, possibly UFO related, including a dramatic sighting over Baja California in February 1990, and several nighttime sightings over Washington State during 1992.

Peter received his bachelor’s degrees from Stanford University in California, His graduate education and M.S. degree from the University of Washington in Seattle, as well as an M.B.A. degree in finance and international business from the Graduate School of Business.