Randall Carlson On Fade To Black 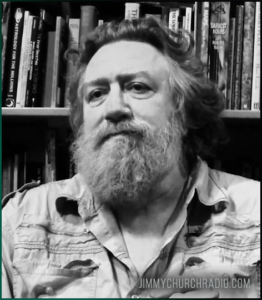 Randall Carlson is a master builder and architectural designer, teacher, geometrician, geomythologist, geological explorer and renegade scholar. He has 4 decades of study, research and exploration Into the interface between ancient mysteries and modern science, has been an active Freemason for 30 years and is Past Master of one of the oldest and largest Masonic lodges in Georgia. He has been recognized by The National Science Teachers Association for his commitment to Science education for young people.

The acclaimed 1997 TBS/CNN documentary “Fire from the Sky” was based upon his research into Earth change and catastrophic events. He has organized several dozen field expeditions documenting evidence for catastrophic earth change. He has received academic recognition for outstanding work as a student of geology. His work incorporates Ancient Mythology, Astronomy, Earth Science, Paleontology, Symbolism, Sacred Geometry and Architecture, Geomancy, and other arcane and scientific traditions. For over 25 years he has presented classes, lectures, and multimedia programs synthesizing this information for students of the Mysteries.

Randall is uniquely qualified to interpret the hidden meaning of the great masterpieces of mystical architecture, as well as esoteric and occult ritual and symbolism. It is his aspiration to affect a revival of lost knowledge towards the goal of creating the new world based upon universal principles of harmony, freedom, and spiritual evolution.

Tonight we are going to get a Sacred Geometry 101 lesson...all of it.