Ronnie Dugdale On Fade To Black 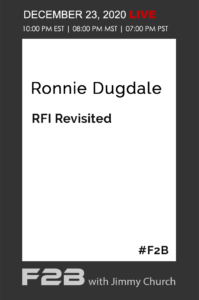 Tonight, live from the UK, our guest is Ronnie Dugdale and we are going to talk about his input with John Burroughs new book and his research with the Rendlesham Forest Incident.

Ronnie has appeared on many radio shows, including the 'Behind the Paranormal' Return To Rendlesham Specials and several appearances on KGRA’s Phenomenon Radio with John Burroughs and Linda Moulton Howe.

In May 2018 Ronnie gave a Rendlesham Forest Incident timeline presentation to a packed audience at the Woodbridge Community Hall sharing the stage with his friends, Investigators Brenda Butler, Chris Pennington and John Burroughs, and has had a series of articles on the RFI published in the ‘Outer Limits’ magazine.