Nancy Talbott is the Field Research Coordinator and press contact for the BLT Research Team (John Burke, William C. Levengood and Nancy Talbott), which has been examining plants and soils in crop formations in several countries. They have also studied the electromagnetic environments, unusual animal deaths in the U.S. and Canada, and UFO trace-cases since 1989.

In the late 1960s and early 1970s, Ms. Talbott worked as a Research Assistant at the University of Maryland and at Harvard University. She then became an independent producer of Appalachian music festivals in the northeast. Since 1992 she has devoted 100% of her time to the development of a cohesive, well-trained field sampling and reporting network in several countries. This network has supplied the thousands of samples examined in-depth by Levengood, biophysicist, and others over the last nine years.

Ms. Talbott lectures to groups internationally which are interested in learning about the physical abnormalities in the plants and soils associated with these phenomena and the hypotheses developed so far to help organize the laboratory data within a scientific context.

BLT Research is a hard-working group of thoroughly interested, capable individuals serious about applying scientific methodology and solid professional expertise to these perplexing mysteries which have been ignored by the scientific establishment for far to long.

An engaging speaker able to present hard scientific data to the lay person in a compelling, easy-to-understand presentation, Nancy mixes facts and visual images and her years of experience to skillfully show the high-strange, scientific reality behind mysterious phenomenal events. 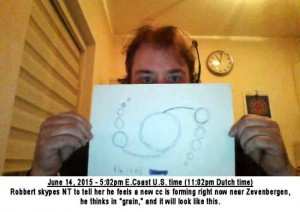 Here’s the image showing Robbert holding up his drawing (and note the clock behind him on the wall, showing clearly it is 11:02pm HIS time (5:02 MY time)