Censorship And The 1st Amendment 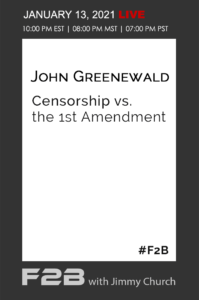 Tonight, John Greenewald will be discussing what is censorship in the United States and what are actual 1st Amendment Rights and how do they apply to individuals and private companies.

Greenewald named his online archive “The Black Vault.” His teenage project turned into the largest private online collection anywhere in the world, with million of pages of material. At the age of twenty-one, Greenewald published his first book, Beyond UFO Secrecy, in 2002. It was later put into a second expanded edition, and was re-published in January, 2008.