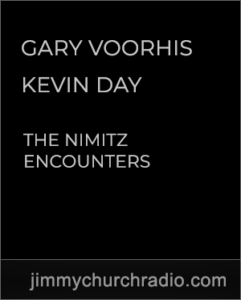 November 2004, 90 miles of the coast of Mexico near Baja, California, the Nimitz carrier strike group was conducting routine training and aerial defense exercises when unexplained events occurred. No one could have predicted what would soon confront the world’s most advanced Naval war ships and fighter jets.

Kevin Day was the air intercept controller (AIC) aboard the Princeton during the now highly-publicized Nimitz UAP incident. Like many people who’ve experienced the UFO phenomena, Day’s life changed that day, and like many compelled him to tell his story in one way or another.

Day hid he truth “in plain site” in his 2008 fictional story “The See’r” that mirrored his experience witnessing an aerial phenomena unlike he’s ever seen- the TIC TAC encounter. His short stories comprised his books “Sailors Anthology Book's I & II,” but like many confused with the truth presented to them, he told his story through fiction.

Gary Voorhis was an Aegis Computer/CEC Technician aboard the USS Princeton, who spent a week witnessing the strange unknowns and the intercepts by Dave Fravor and the historic Tic Tac encounters.

Voorhis had to sign out chain of custody of the hard drive bricks from the Nimitz encounter to a group that flew in on a helicopter requesting the data recordings. The group was not wearing uniforms.