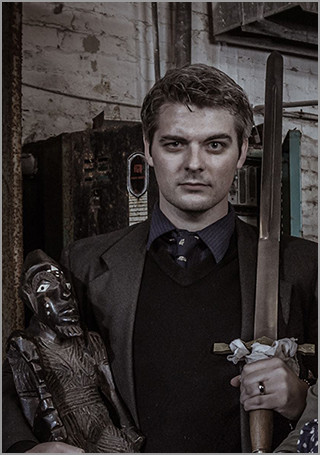 Greg Newkirk is a writer, paranormal adventurer, and professional monster chaser. Over the last two decades, Greg’s supernatural expertise has landed him deep in the mountains with the cast of Finding Bigfoot, investigating mysterious phenomena in some of the world’s most haunted locations, and acting as a guinea pig in dozens of dangerous experiments in search of the truth about alien abduction, ghostly visitations, and cryptozoological creatures. When he’s not busy chasing down cases of the strange and unexplained across the country, he serves as the Director of The Traveling Museum of the Paranormal & Occult, the world's only mobile museum filled with haunted objects that visitors can view, handle, and investigate for themselves.

Dana Matthews is the co-founder and head writer for Week In Weird, has been actively investigating the wide world of the paranormal for nearly twenty years, and starred in the world's first all-female ghost hunting series, The Girly Ghosthunters, in 2002. Her research on the strange and the unexplained has been featured in popular online publications like from Nerdist, io9, and Jezebel, and is regularly used as the basis for several of television's most popular paranormal series. When Dana isn't busy investigating the supernatural, she acts as curator of The Traveling Museum of the Paranormal & Occult, a roving display featuring hands-on, interactive experiences with some of the world's most haunted objects.