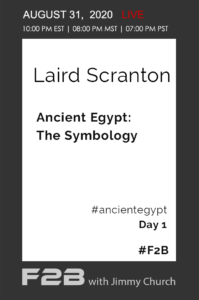 Tonight kicks off night one of our Egypt Week here on FADE to BLACK and our guest is Laird Scranton! We are going to discuss the symbology of the temples, sites, gods, and artwork of ancient Egypt.

Laird Scranton is an independent software designer who became interested in Dogon mythology and symbolism in the early 1990s. He has studied ancient myth, language, and cosmology since 1997 and has been a lecturer at Colgate University.

His work includes articles published in the University of Chicago’s Anthropology News academic journal, in Temple University’s Encyclopedia of African Religion, and in the Vassar Quarterly Magazine.

His book “The Science of the Dogon” was taught at Colgate University under the title “Hidden Meanings: A Study of the Founding Symbols of Civilization.”

Laird has been interviewed on a variety of radio programs around the world including Coast-to-Coast AM and FADE to BLACK and is a featured speaker on ancient mysteries. He also appears in John Anthony West’s Magical Egypt DVD series.