Nassim Haramein On Fade To Black 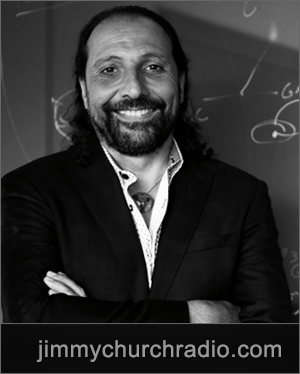 In 2004, Haramein founded the Resonance Science Foundation (formerly Resonance Project Foundation) and in the fall of 2014 Haramein began The Resonance Academy Delegate Program; the first and only unified physics program of its kind, educating thousands of students from over 90 countries around the world.

In 2015 Haramein opened Torus Tech, LLC, a private laboratory where he serves as the Executive Director of Research and Development.

The Connected Universe, a feature length documentary film, was produced based on Haramein’s discoveries and their potential for generations to come.

ARK Crystals, a 25-year project of research and development by Haramein, was released October 2017. ARK crystals are a revolutionary technology that greatly boosts the body’s natural ability to attune with the vitalistic and expansive zero-point field of the quantum vacuum.