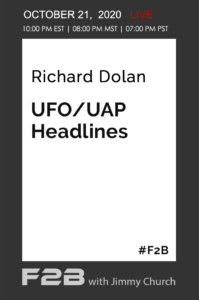 Tonight, Richard Dolan returns for an open discussion on the current state of the UFO/UAP question and where we are with Disclosure as 2020 winds down and we now look ahead to 2021.

In addition to his research, Richard’s company, Richard Dolan Press, publishes innovative books by authors from around the world and he hosts his weekly livestream on his YouTube channel.