Rick DeLano On Fade To Black 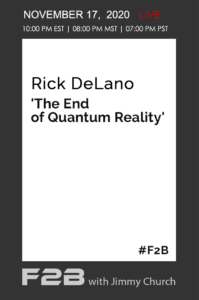 Tonight, our guest is Rick DeLano, the writer, producer, and host of the new film: 'The End of Quantum Reality'.

Rick has worked as an executive producer, and financial consultant in the music and film industries for more than 20 years. A writer and filmmaker, DeLano is best known for producing the controversial movie, THE PRINCIPLE, an endeavor that has rocked the scientific establishment by using its own discoveries to prove that the Earth is centrally located in the universe and sits in a favored position.

His newest production is the film, THE END OF QUANTUM REALITY, a work based on the discoveries of former MIT mathematics professor, Dr. Wolfgang Smith. The movie details how it is that Dr. Smith has solved the legendary “quantum enigma” - the paradox whereby Schrodinger's cat is both alive and dead or one particle can be at two places at once, something that Albert Einstein futilely spent the last 30 years of his life trying to understand.