Uri Geller On Fade To Black 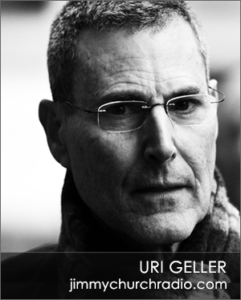 Tonight, our guest is Uri Geller and we'll be discussing his life and work with governments around the world, the CIA, magic, science and consciousness.

At the age of four, Uri had a mysterious encounter with a sphere of light while in a garden near his house. A retired Israeli air force officer, who was an eyewitness to this encounter, validated this mystifying event decades later.

In 1969 he began to demonstrate his powers of telepathy and psychokinesis to small audiences. By the end of 1971, he was a household name throughout Israel.

Since then Uri has negotiated peace treaties, addressed a group of US Senators and National Security Executives at the high-security room in the Capitol Building in Washington, lectured to the directors and CEOs of Henkel, the Prime Minister’s Conference, Novartis, Mizuno, Sony, Rolls Royce, Hallmark and many more.

In 2017 the CIA released a large volume of previously top secret data, including documents and memos about the tests that were performed on Uri Geller.

The CIA concluded that Uri “demonstrated his paranormal perception ability in a convincing and unambiguous manner.” Click here for more information.