It’s Greenewald, Not TTSA, Who Broke The Biggest UFO Story Of The Year 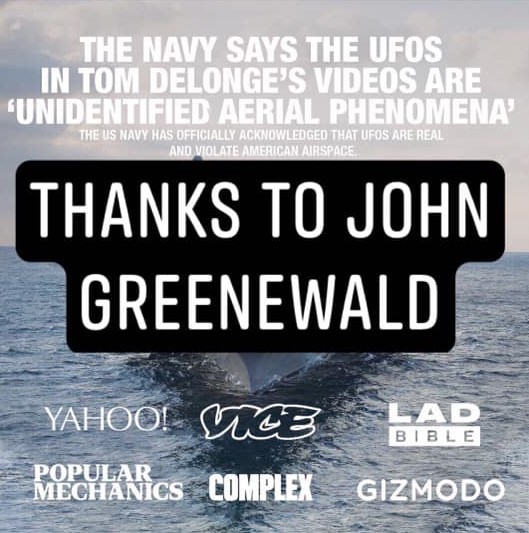 Last week on September 10th and 11th, John Greenewald of The Black Vault broke two of the biggest UFO news stories in history.

After reading both and speaking to John, we decided to immediately break the stories on Coast to Coast AM, which we did on Saturday, September 14, 2019.

On Monday, September 16 and thru to today, all hell has broken loose and EVERY mainstream media network around the world has carried the news that Greenewald released last week... with each and every one giving him the credit that he deserves.

All except one... TTSA, The To The Stars Academy run by Tom DeLonge.

John Greenewald, with many others, including myself, have been looking into TTSA over the last year and a half and their many mistakes, inconsistencies, and questionable statements and asked them directly for some answers.

TTSA, to this very day, has answered none of the questions presented to them.

I personally sent Tom DeLonge a list of 10 questions (at a time when our communication was solid) and copied everyone at TTSA... and the responses I got (four) went something like THIS: "Jimmy, chill out, don't poke around, we got this... your questions are not as important as what we know... this is top secret stuff and you need to back off..." all the way to "Jimmy, please refer all of your questions to our PR team."

So, what does one do when you don't get answers???

You do whatever you can and you never let up... THAT's what you do... and Greenewald utilized every source in his disposal... the FOIA, the Pentagon and specifically, the US Navy.
The results Greenewald and The Black Vault have gotten have been well documented on his site and on FADE to BLACK over the last year. His reporting on the history of AATIP, Luis Elizondo and the inner-workings of TTSA have all been spot on, direct and to the point... but the story behind it all is far from over.

John Greenewald, The Black Vault, and FADE to BLACK have gotten more than our fair share of public and private attacks over the reporting we have done while trying to get to the truth... and I understand most of it... because there are real emotions involved with our community and the UFO question and our search for answers.

Here is the strange paradox, or irony in all of this: While John Greenewald was doing his true journalism and seeking answers from the Pentagon and US Navy about TTSA and Luis Elizondo, he got the them to admit that the three recent videos (FLIR1, Go Fast and Gimble) all contained UAPs (Unidentified Aerial Phenomena)... and that all three videos WERE NOT TO BE RELEASED TO THE PUBLIC.

He broke the story on what may be the biggest news in the history of Ufology... maybe the world.

Luis Elizondo and TTSA did not.

When you read all of the press out there right now, you can clearly see that it was John Greenewald, and not TTSA or Elizondo who did the work... and you'll also clearly read that Elizondo DID NOT get the Pentagon to release the three videos to the public as TTSA has stated from the beginning back in December of 2017.

Now we have a real problem... did Elizondo mislead both TTSA and the UFO community???
In doing so, has he now stopped any and all future videos and evidence coming from the Pentagon???
Where does this leave TTSA and any credibility that they may have left???

These questions and many more are going to surface and have to be answered.

There is also one very big problem we have to face, which is this:
On one hand, the critics of John Greenewald and FADE to BLACK are very happy about the recent US Navy admitting in public that the UAPs in the three videos are real... and they believe the Navy's statements... cool... on the other hand, those same critics choose to ignore the US Navy's position that the three videos were not to be released to the public... which is in direct conflict with the statements by Luis Elizondo and TTSA.

You see, you can't have it both ways.

Both John and I will continue to search for the truth and we are closer now than ever to the UFO Question.

It's very basic; If Elizondo is who he says he is, with his secret knowledge and influence, or TTSA's amazing list of CIA insiders... why couldn't either one of them get the Navy to state the facts about UAPs in the three videos?

While I totally appreciate the TTSA marketing money and their ability to bring all of this into the public via the media, and it's been a great ride, it was John Greenewald and not TTSA or Elizondo who broke the biggest story of this or any other year.

TTSA and Tom DeLonge have chosen to ignore this fact because of their bitterness towards someone who just wanted answers... all they had to do from the very beginning was be clear, transparent and honest... in doing so, today TTSA would be celebrating the hard work of John Greenewald along with the rest of us... instead, they are not.

Let me be very clear: TTSA and Tom DeLonge are acting like this is their story, their work... and ignoring the due diligence and reporting of Mr. John Greenewald Jr.