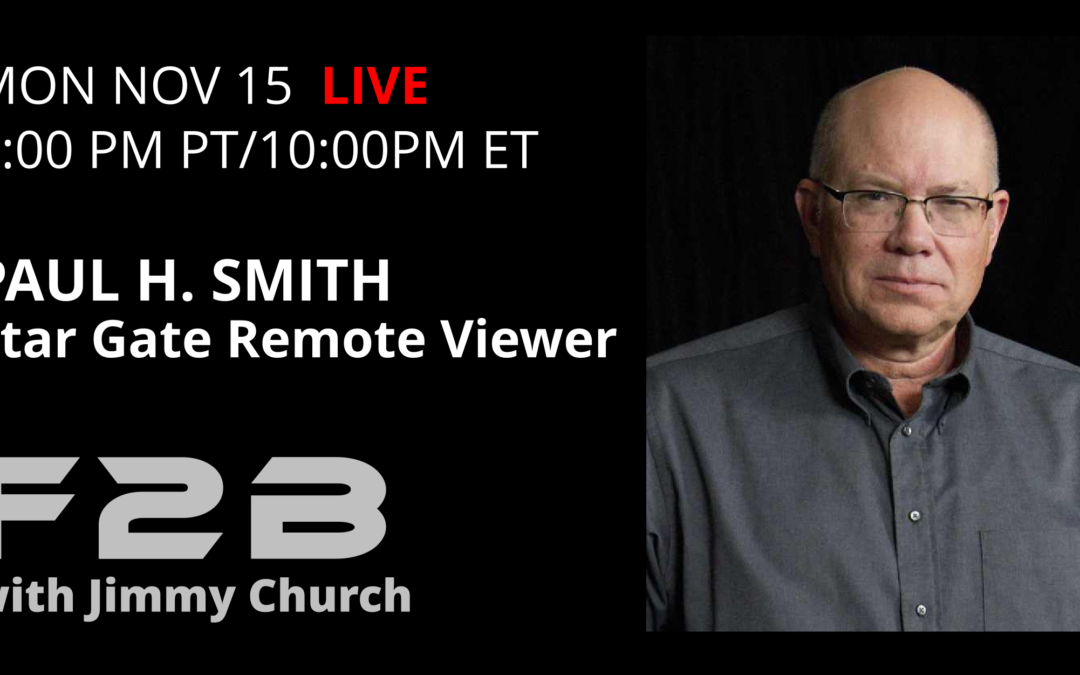 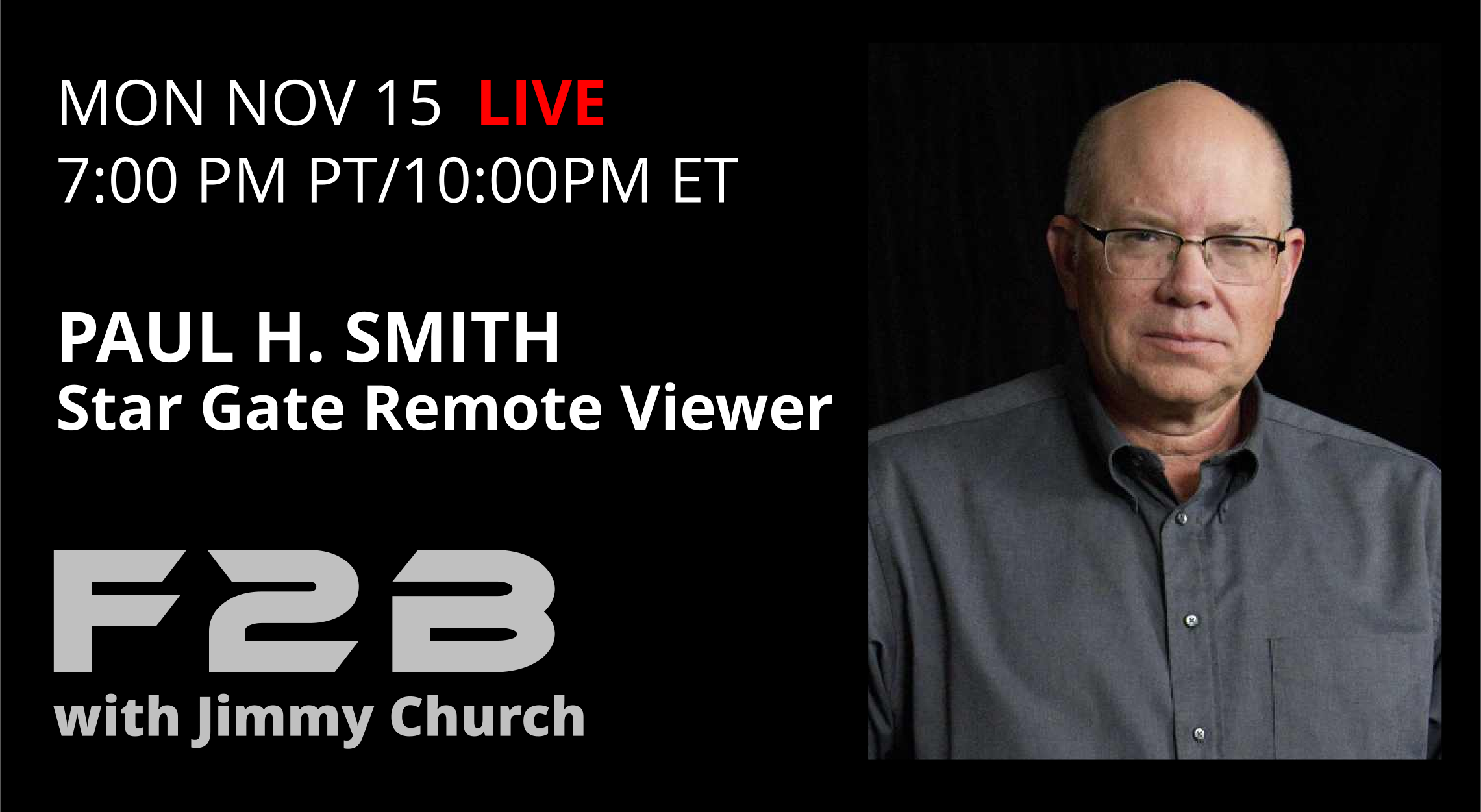 Tonight, Monday on FADE to BLACK: Paul H. Smith joins us for the first time to discuss his career as a remote viewer for Star Gate and the current state of Disclosure around the world.

For 7 years Paul H. Smith, PhD (Maj., US Army, ret.) was a psychic spy in the DoD’s Star Gate remote viewing (RV) program, where he worked as an operational remote viewer, training instructor, unit security officer, and unit historian. A founder and former president of the non-profit International Remote Viewing Association, he is CEO of Remote Viewing Instructional Services, Inc. His book Reading the Enemy's Mind was a Readers Digest Book Bonus Feature and Editors Choice selection. He is also author of The Essential Guide to Remote Viewing and Reading the Enemy’s Mind: Inside Star Gate, America’s Psychic Espionage Program, as well as co-producer of the “Learn Dowsing” and “Remote Perception” home study courses. Paul has a Ph.D. from the University of Texas at Austin in philosophy of mind, consciousness, philosophy of science and philosophy of parapsychology. His BA is from Brigham Young University and MS from the National Defense University (both in Middle East studies).

Paul has been interviewed many times–by Art Bell and George Noory on Coast to Coast AM, and on A&E, the History Channel, the Travel Channel, Discovery, CBS Sunday Morning and many more. One of his adventures was teaching actor Rob Lowe and his two sons how to remote view for the series “The Lowe Files.” Paul was also featured in the documentary “Superhuman: The Invisible Made Visible.” 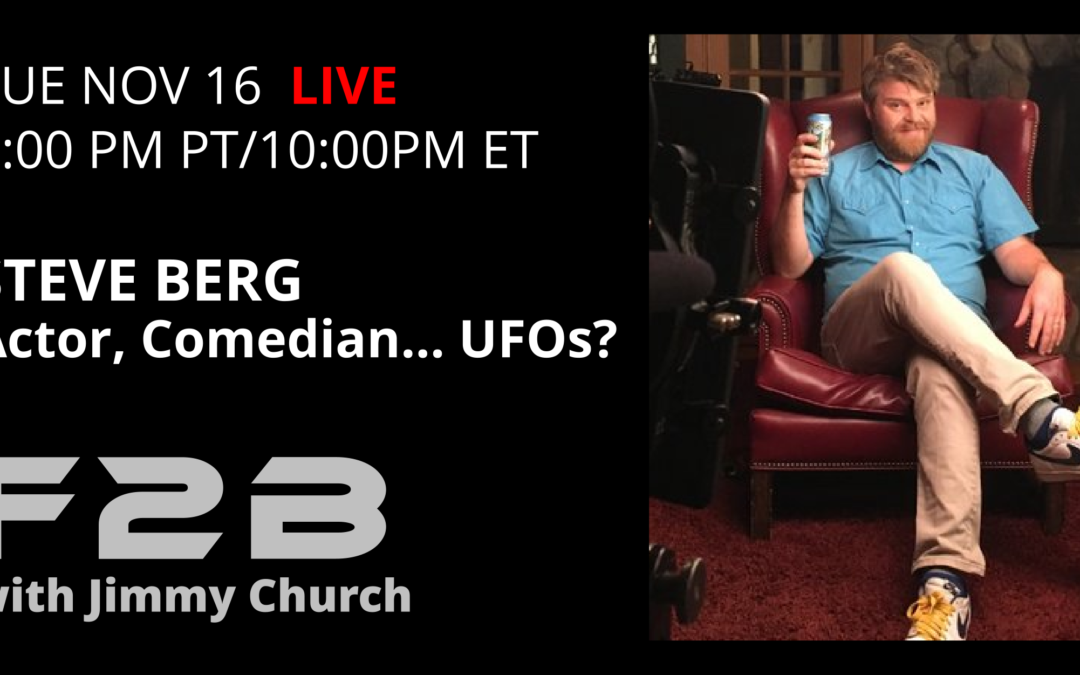 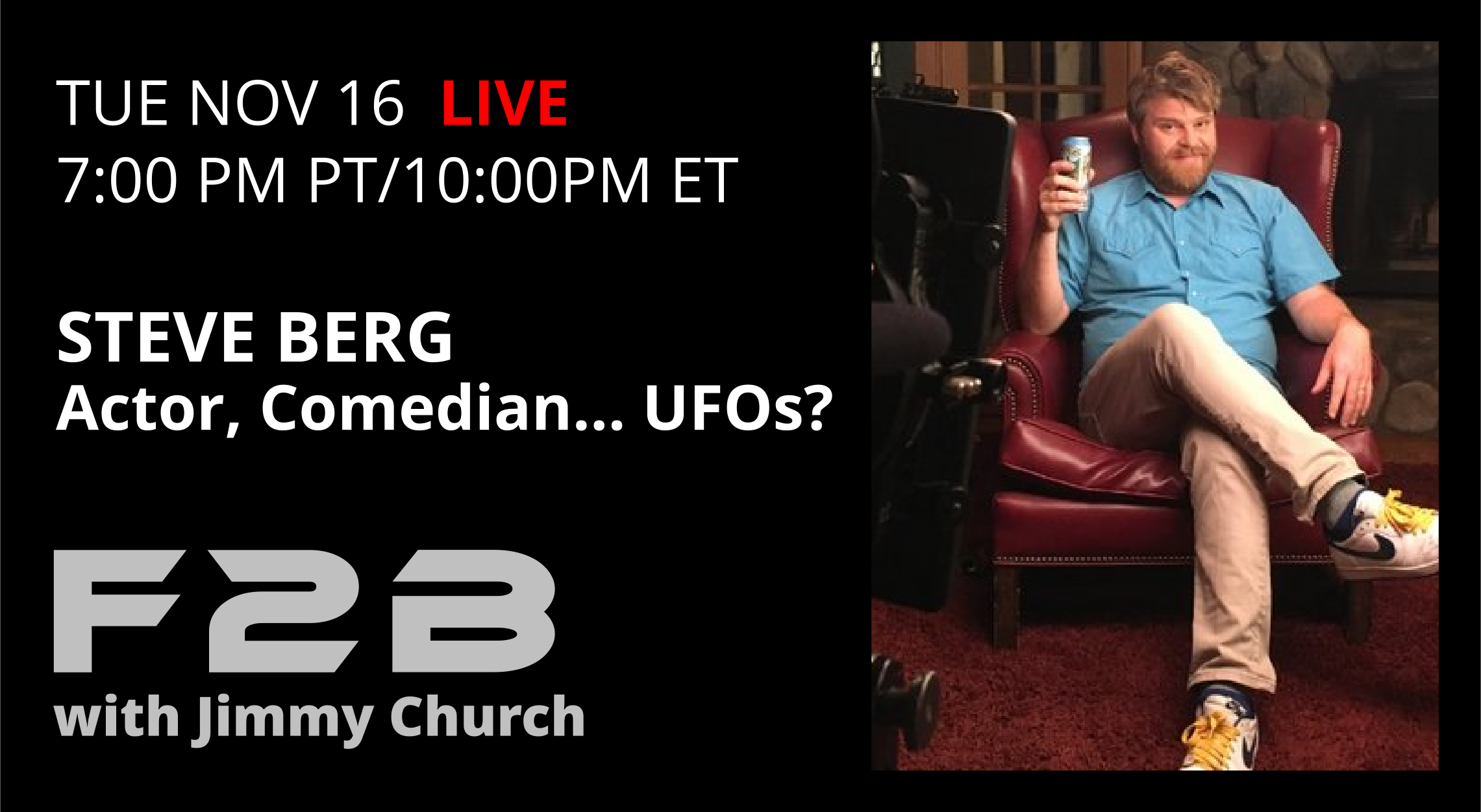 Tonight, Tuesday on FADE to BLACK: Steve Berg joins us for the first time and we are going to talk about his career and how a comedian finds the UFO community and manages to find a way to hang out with us.

Steve is an actor, comedian and improviser who was most recently was the DJ voice in the TV series, Hoops. His credits also include recurring roles on NBC's "The Good Place," ABC's "The Goldbergs," Comedy Central's "Idiotsitter," and BET's "The Comedy Get Down." In addition, he was a series regular in the Fox Television's "WTF America" produced by Ron Howard and Brian Grazer. 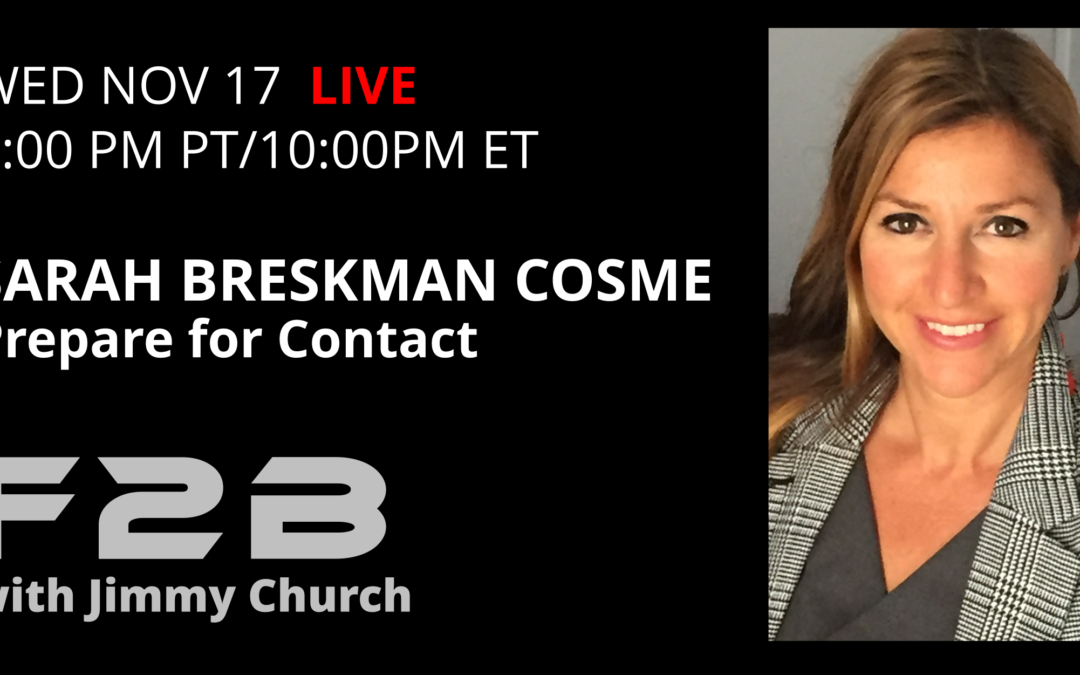 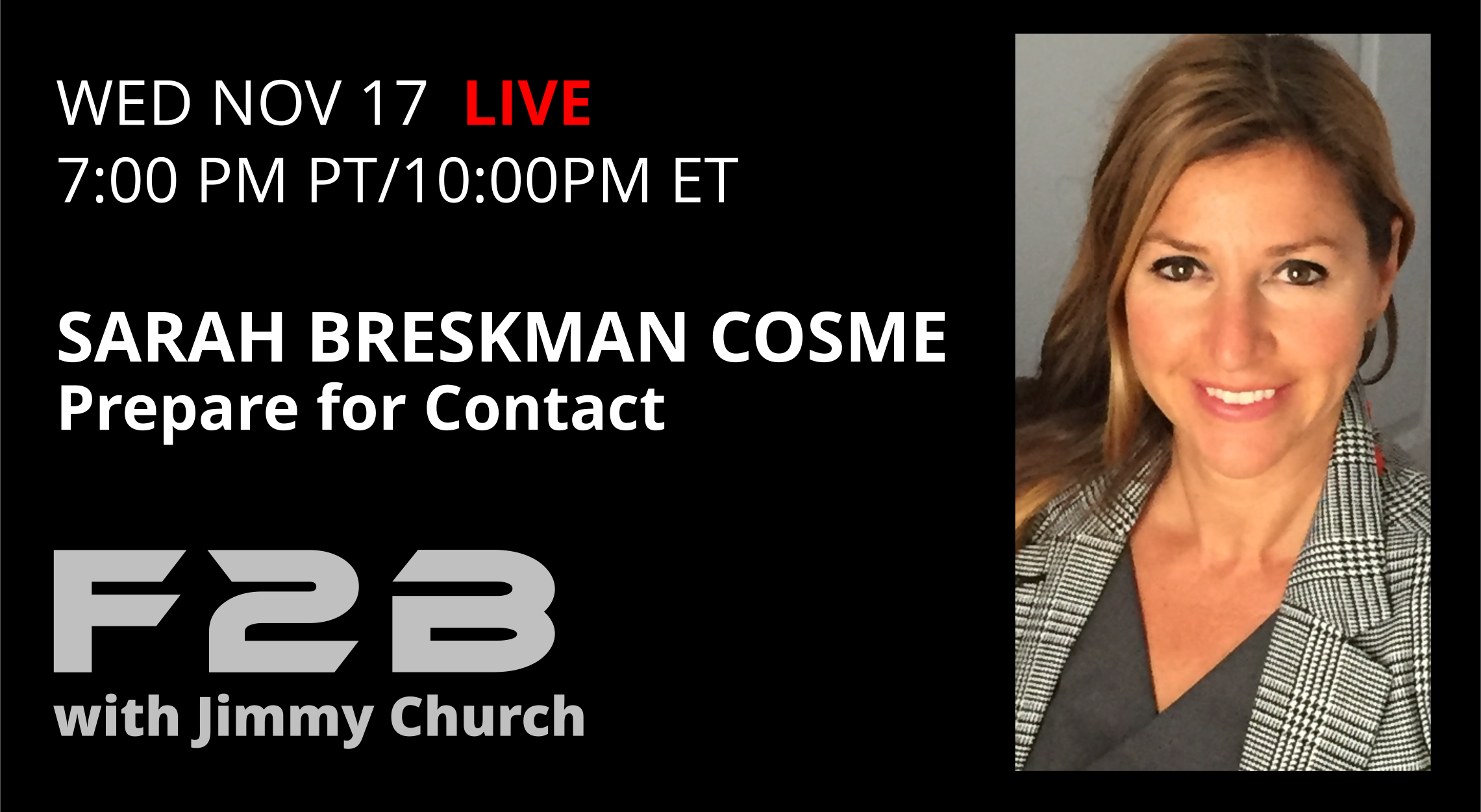 Tonight, Wednesday on FADE to BLACK: Sarah Breskman Cosme wraps up our first-time guests week on F2B and tonight we are going to cover Contact, Abductions, Disclosure and what we can do to get ready for the Big Day.

Sarah Breskman Cosme is a certified Master Hypnotist, a level 3 QHHT practitioner, a student of Dr. Brian Weiss, and the author of Amazon's #1 best-selling hot new release "A HYPNOTIST'S JOURNEY TO ATLANTIS." She has been featured and interviewed Nationally as well as Internationally on over a dozen podcasts and shows. Recently featured on GAIA TV her book was also chosen by Regina Meredith for her book of the month club. 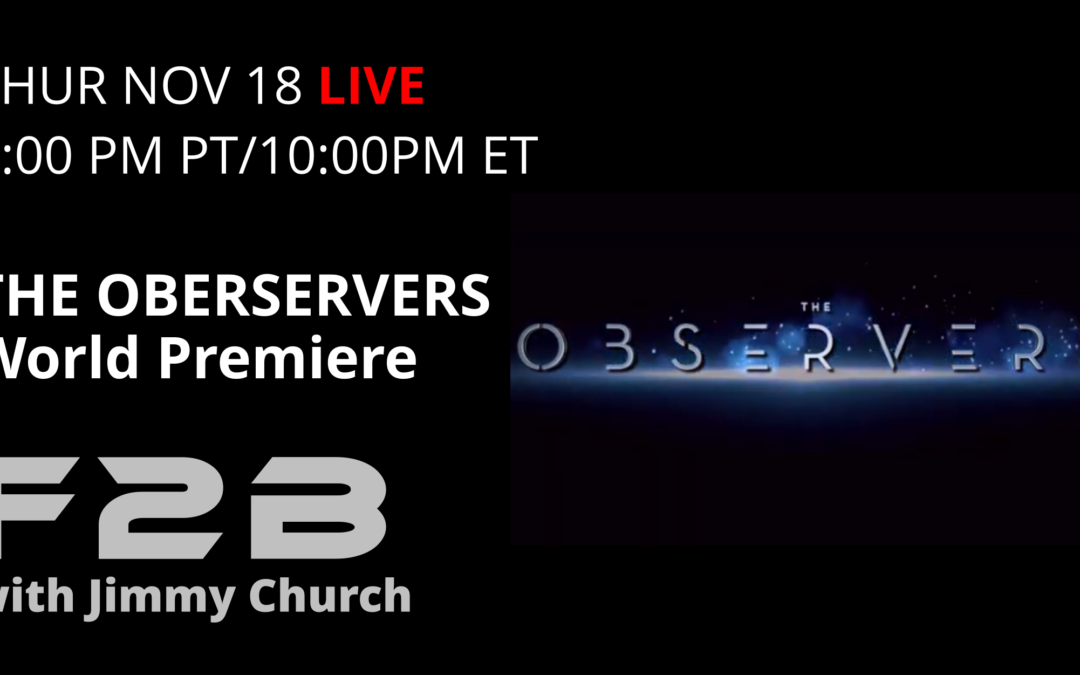 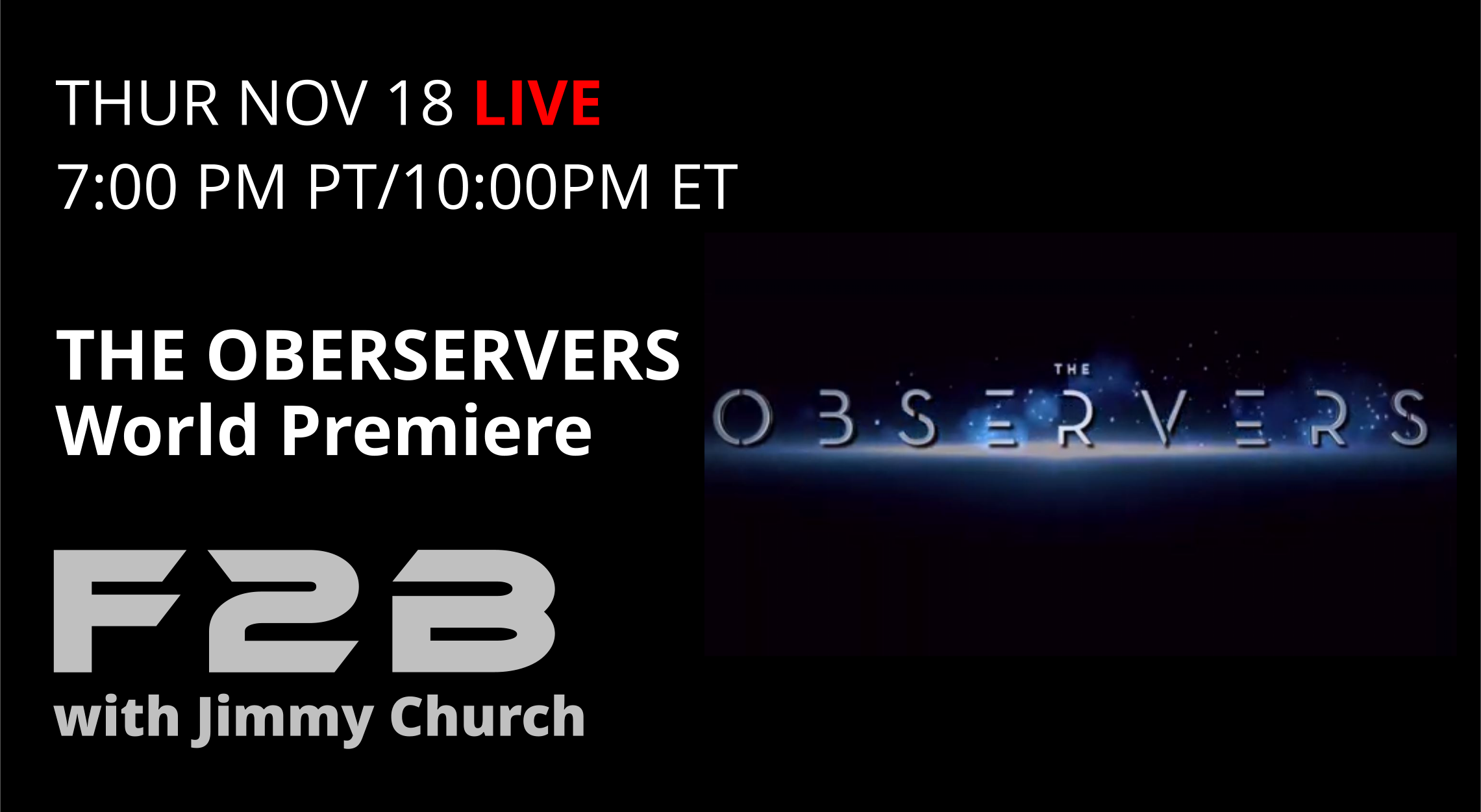 The Observers has it's World Premiere tonight, November 18th and we are going to celebrate with conversation from those who helped make this film and event possible... all live and simulcast on UnX Network, F2B and throughout the world on multiple media streams!!! 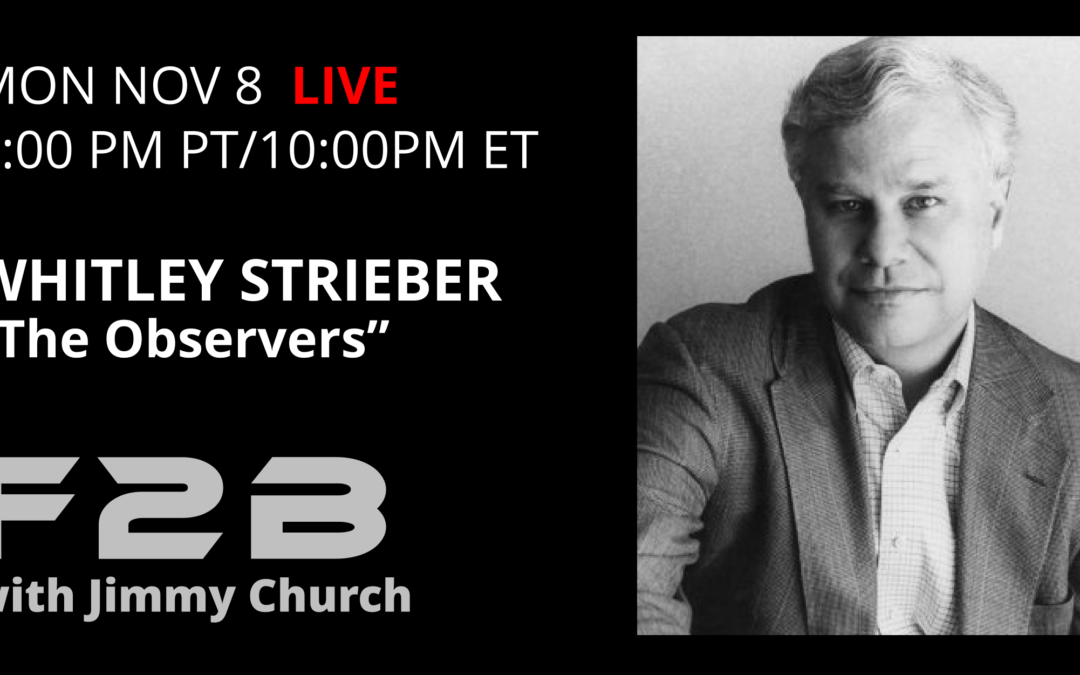 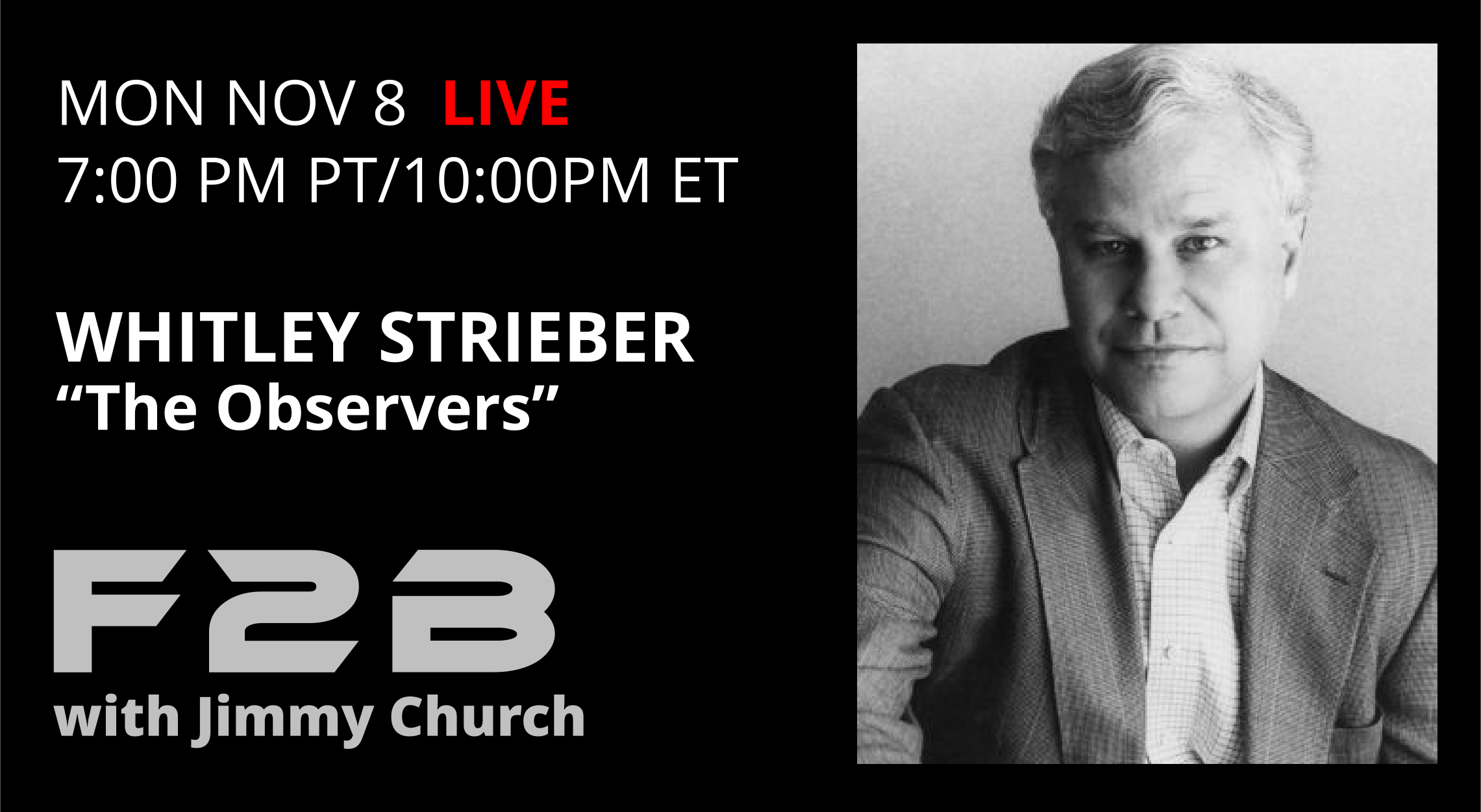 Tonight, Monday on FADE to BLACK: Whitley Strieber joins us to discuss the new film, "The Observers". In this movie, Whitley, along with Linda Moulton Howe, Richard Dolan, Lue Elizondo, William Henry, John Greenewald, Jesse Venturan and Debbie Kauble, all discuss what Disclosure means for our world today.

As someone who has changed our worldview, Mr. Strieber is one of the iconic cultural figures of our time.

Whitley is the author of the Communion series of books and many novels ranging from the Wolfen and the Hunger to the Grays and the Alien Hunter series. Communion, the Wolfen, the Hunger and Superstorm have all been made into movies, Superstorm as the Day After Tomorrow. 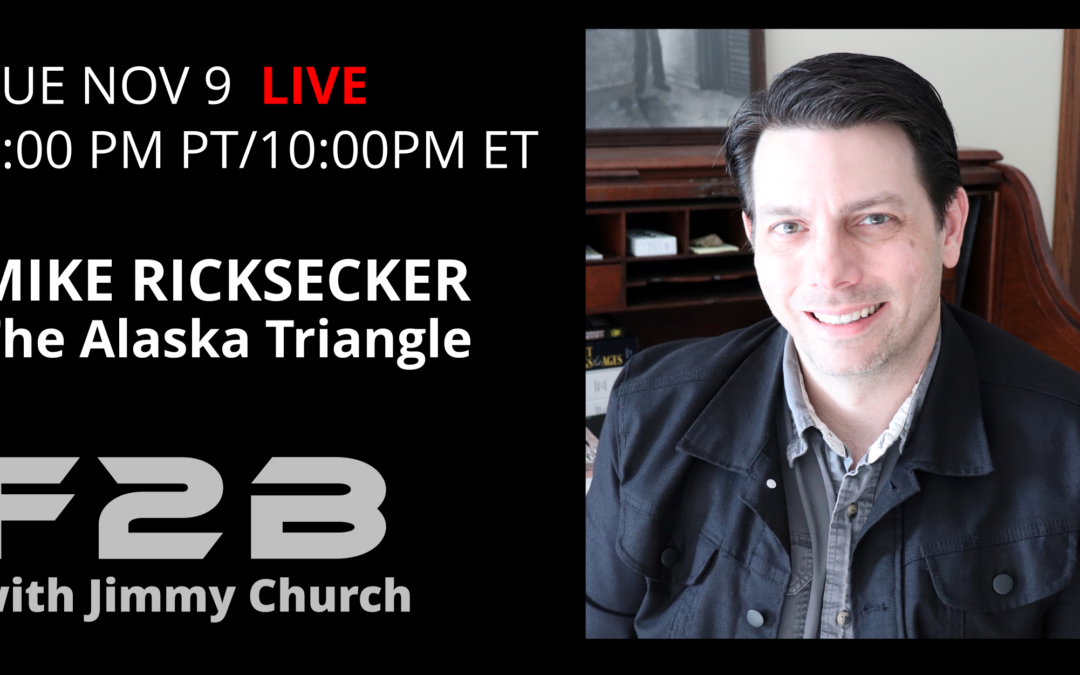 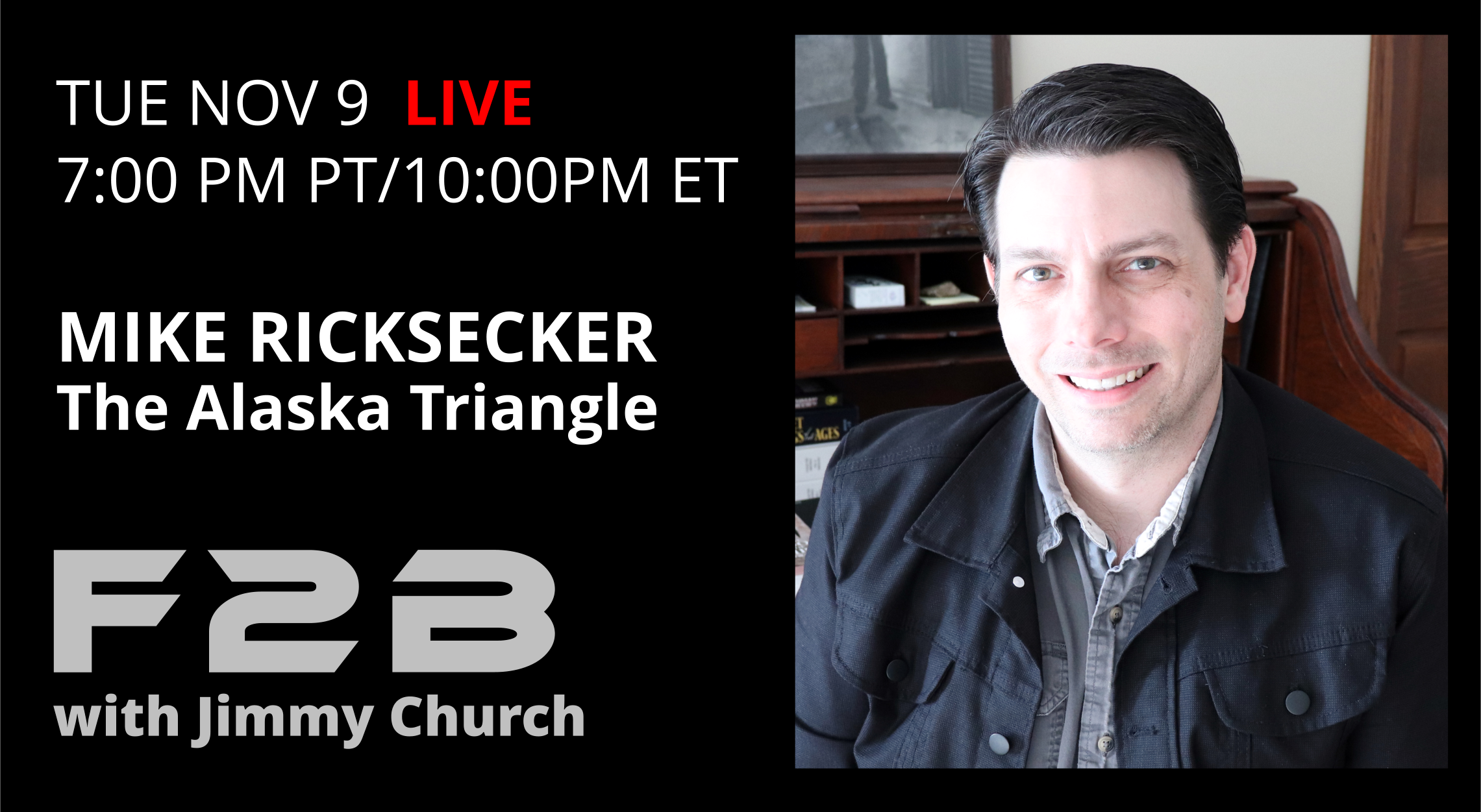 Tonight, Tuesday on FADE to BLACK: Mike Ricksecker joins us to talk about the Travel Channel's series: "The Alaska Triangle" and his book: "Alaska's Mysterious Triangle.

Mike is the author of the Amazon best-selling "A Walk In The Shadows: A Complete Guide To Shadow People", eight historic paranormal books, and the esoteric tome "Alaska's Mysterious Triangle". He has appeared on multiple television shows and programs as a paranormal historian, including Travel Channel’s The Alaska Triangle, Discovery+’s Fright Club, Animal Planet’s The Haunted, Bio Channel’s My Ghost Story, and RenTV’s (Russia) Mysteries of Mankind. Mike also produces his own Internet supernatural-based shows on the Haunted Road Media YouTube channel, and is the producer and director of the docu-series, The Shadow Dimension, available on several streaming platforms.

On Tuesday and Wednesday nights, he hosts The Edge of the Rabbit Hole livestream show and the Connecting the Universe interactive class through the Connected Universe Portal, respectively. His Haunted Road Media won the award for Excellent Media In The Paranormal Field at the 2019 Shockfest Film Festival.